So last week I decided I wanted to make some kind of stylized treatment of leaves - I have been observing the central axes of both individual leaves and boughs of leaves. A set of leaves strewn along a branch tends to radiate outwards at various angles to the branch or twig they're on. The leaf bunches themselves tend to deviate from the horizontal so they can present more surface to sunlight, I suppose. I think there's some kind of fractal pattern involved here but I haven't been able to discern it yet. 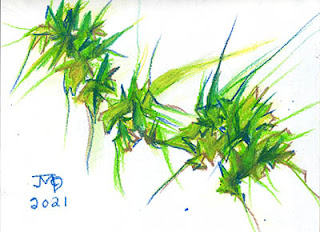 So I used the oil pastels again. This makes the second time they've defeated my attempts to create something aesthetically defensible. Also I really didn't achieve any simplified but interesting "formula" - a formula was what I was going for, though I hate to admit it - for the leaf patterns themselves. As you can see, what I ended up with is as ugly as hell. I signed it anyway because one has to admit the failures as well as the triumphs.

The lesson I learned from this is that the foliage of a healthy tree in summer is basically amorphous. Going for a linear interpretation was probably doomed to failure, unless I want to commit to actually drawing every individual leaf and filling in light green for sunlit patches and darker or lower-chroma bits for leaves in shadow. This is basically impossible. 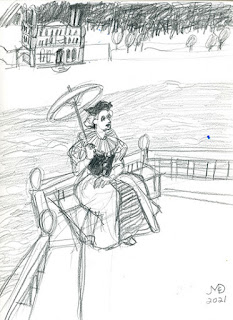 Real or Imaginary - Can't Seem to Integrate the Two

I'm still dealing with the tension I feel between my imaginary, "visionary" (in a minor sense - I'm not Teresa of Avila) - images and my need to depict external reality. I really want to become an Expressionist, but I keep coming up Surrealist. Here's the latest half-asleep dream vision. Might make a painting out of it some day.

Email ThisBlogThis!Share to TwitterShare to FacebookShare to Pinterest
Labels: oil pastel drawing of leaves, pencil drawing of queen with parasol 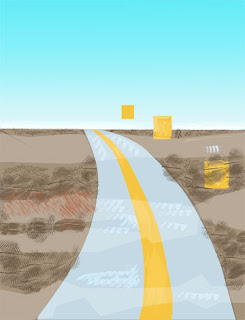